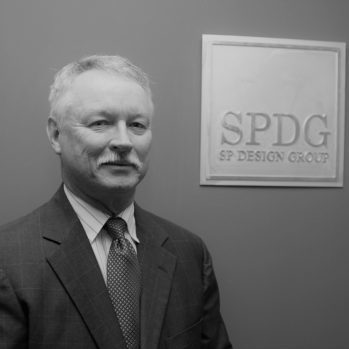 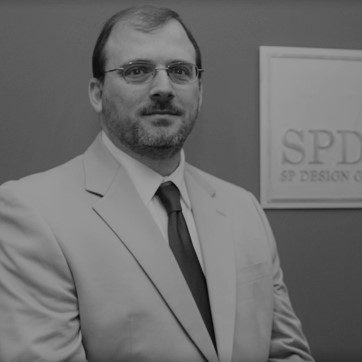 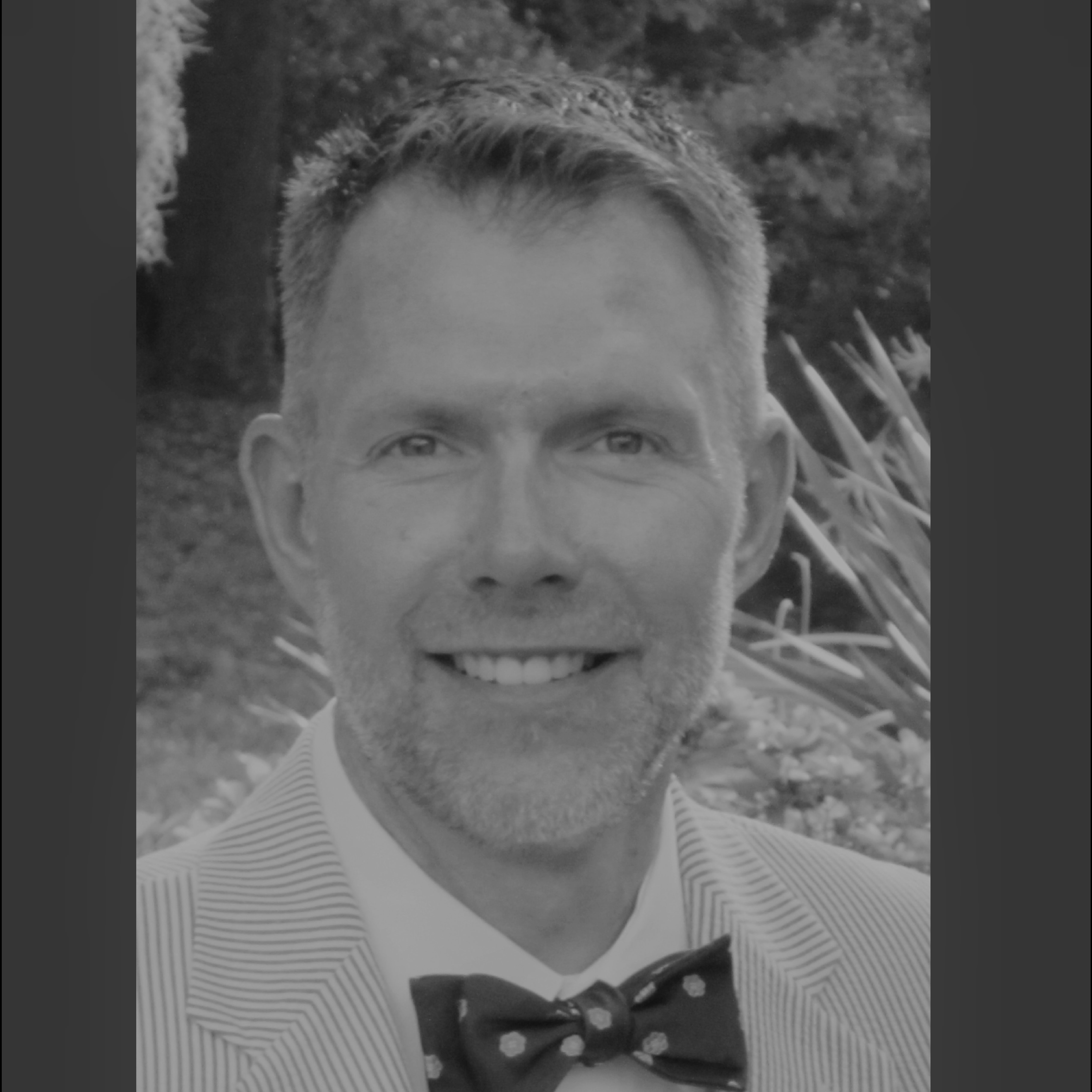 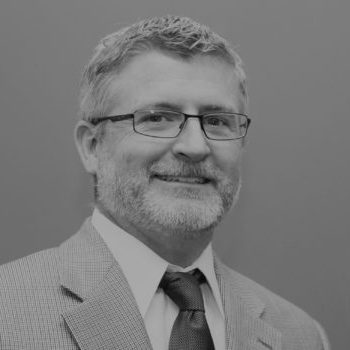 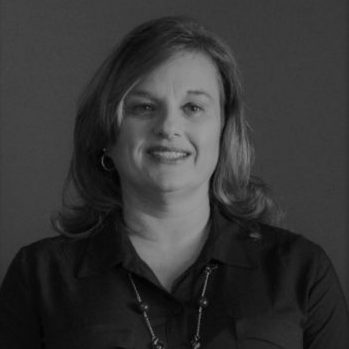 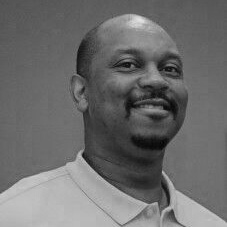 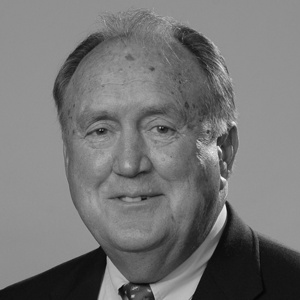 He is registered to practice architecture in Georgia, Alabama, Tennessee and North Carolina and holds a National Council of Architectural Registration Boards Certificate.

He is an ACI Certified Concrete Construction Inspector and a GCPA Structural Masonry specialist. Mr. Parker also possesses certifications from NPDES for Erosion and Sediment Control and Certified Craftsman from the Mohawk Group for Carpet Installation.

Mr. Parker is a past president of the Middle Georgia Chapter of the American Institute of Architects and is a member of the National American Institute of Architects. Civic responsibilities to youth and education resulted in his being a Board Member of North Macon Youth Association. Mr. Parker is presently on the board of the Macon Touchdown Club, where he serves on the Scholarship Committee. Mr. Parker served on the Board of Windsor Academy and is a past president of Tattnall Academy Football Boosters. As a committee member for the Central GA US Green Building Council Chapter, he continues to learn more about sustainable design and how it can benefit our clients and the community. He is a member of Mt. Zion Baptist Church. and an Event Committee member for the Ronald McDonald house.

While attending Middle Georgia State University, Mr. Mines began working for SP Design Group in the print room working his way to partner with the firm. Mr. Mines has been with SP Design Group for the past 21 years and in 2011, he accepted a partnership within the firm.

Mr. Mines serves on the Board of Directors and is current President for the Optimist Club of Warner Robins and past Lt. Governor for Optimist International for the State of Georgia. He serves as Assistant Scout Master for the Boy Scout Troop #400. Mr. Mines is an avid bowler, bowling on two teams and serving as President for one of the leagues in the Warner Robins Bowling Association.

Mr. Chaloult received a Bachelor of Architecture from Texas Tech University, Lubbock, Texas with a minor in Urban Design. Upon graduation, he was commissioned a Second Lieutenant in the United States Army. He is also a graduate of the United States Army Quartermaster School, Ft. Lee, Virginia.

He is currently registered to practice architecture in Georgia, Florida, Alabama and Texas and holds the National Council of Architectural Registration Boards Certificate.

He was the architect on the Maxwell Student Union Project at Georgia College & State University and recipient of two AIA Middle Georgia Design Awards in 2001. Mr. Chaloult’s design of the Northwoods Academy School for the Bibb County School District in Macon, Georgia was awarded first place in the AGC Build Georgia Awards for 2010.

Mr. Chaloult is an active member of the American Institute of Architects, having served as president for the Middle Georgia Chapter in 2002.

He is also a member of the Texas Society of Architects, the National Trust for Historic Preservation, the Texas Tech University Alumni Association and the Sigma Alpha Epsilon Alumni Society. Mr. Chaloult is a past president of the Rotary Club of Warner Robins and currently serves on the Board of Directors for the organization. He is a Will Watt Fellow, a multiple Paul Harris Fellow as well as a Benefactor.

Mr. Chaloult is a member of Southside Baptist Church in Warner Robins, Georgia where he resides with his wife Wendy and their two children Nicholas and Anderson.

His degree has a specialization in Electrical Engineering and a minor in Computer Engineering.

Mr. Wilson joined SP Design Group in 1990 while still attending college. After completing his education in 1994, Mr. Wilson continued to serve as a full-time design engineer with SP Design Group. He became registered in the state of Georgia in 1998 and is also registered to practice engineering in Alabama and Florida.

Mr. Wilson is active in the community and has served as president for the Warner Robins ‘Noon’ Optimist in the past and remains an active committee chair. He is active with his children’s sports pursuits in tennis, golf and baseball.

Mr. Wilson is very active in USTA tennis and enjoys golf on occasion. 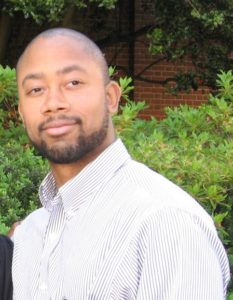 He has experience at all levels of the design process and has worked on a variety of project types with Healthcare being a focus. He has a background as a staff architect for a Health System. His duties have included programming, project manager, architectural design, construction administrator and budgeting. Mr. Smith is an active member of the American Institute of Architects where he served as treasurer for 4 years.

Mr. Smith participates in a weekly after school tutoring program. 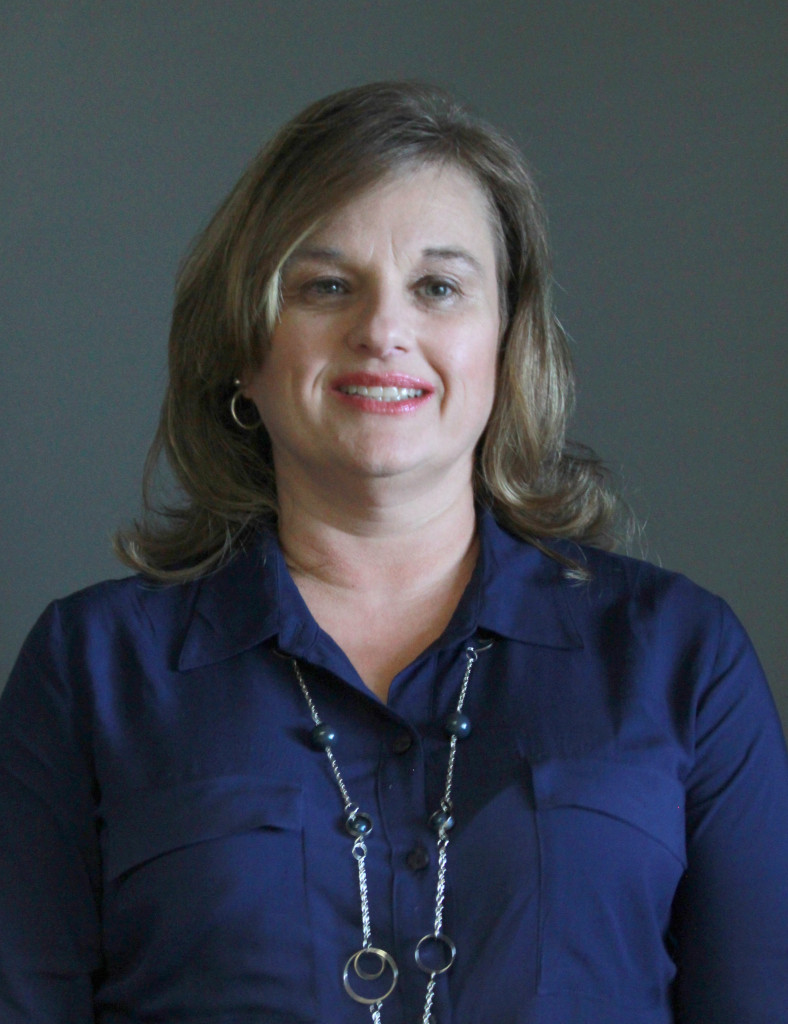 Ms. Shumate has over 8 years of experience in the Health Insurance Industry. She was a processor, Customer Service Representative, and a Quality Analyst. She has over 20 years of experience in Accounting and Human Resources. For 7 of those years, she specialized in Payroll from an Associate to a Supervisor, where she had 8 employees to manage for Ikon Office Solutions. Ms. Shumate prepares all contracts and forms required for projects. She also handles all accounting duties for the company.

Ms. Shumate serves on the Board of Directors with a local non-profit organization called Friends Helping Friends. In the past 6 years they have helped raise money for individuals and local groups for medical and essential needs.She has also served in the past on the Board of Western Little League, where she was the President of the Ladies Auxiliary for 2 years. Ms. Shumate enjoys sewing, crafts, and spending time with her two sons and granddaughter.

Mr. Day began his career in 1985 with Tappa Hanna Construction in Clayton, Delaware as a draftsman. While attending GA Tech, he was employed at A. Stanford Adams, Architect, AIA, PC in Macon, Georgia. Upon graduation, Mr. Day began working full-time for A. Stanford Adams Architect where he completed his architectural internship and became licensed in 1995. Mr. Day became a partner in Adams and Day Architects, AIA, PC in 1998 where he was a principal for sixteen years, eventually becoming President of the corporation. He has recently accepted a position with SP Design Group Architects & Engineers, Inc.

Mr. Day has 26 years experience in Architecture. He has experience at all levels of the design process and has worked on a wide variety of project types including educational, ecclesiastical, municipal buildings, higher education and numerous private projects. His design background is strengthened by the variety of projects, budgets and clients Mr. Day has been involved with. His duties have included programming, project manager, architectural design and construction administration. He has completed over 140 hours of accredited professional training classes, workshops and seminars since 2010.

Mr. Day is a member of the American Institute of Architects where he served as President of the AIA Middle Georgia Chapter for 5 years. He is the past President and has also served on the AIA State Board as the Education and Communications Vice President. Mr. Day is an active member of Mount Calvary Lutheran Church in Warner Robins where he most recently served as an Elder. Activities with his son such as golf, bowling, riding trains or watching the races fill his personal time. 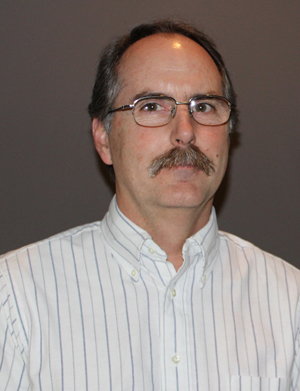 Mr. Vance attended the Architecture Program at Middle Georgia College, Cochran, Georgia in 1983. In 1985-1987, he received a certificate from Meadows Business College, Columbus, Georgia in the Drafting Program.

Mr. Vance worked with Biggers and Crisp Architects from 1987 to 1991 as the only construction documentation person for the Company, providing construction documents for all projects. In 1991, he went to work for Adams and Day Architects as a CAD operator. At Adams and Day Architects from 1991 to 2014, he continued to provide construction documentation and design ideas for many projects including several school projects for the Monroe County Board of Education and Dublin Board of Education. During this time, he continued his education in architecture by attending continuing education programs as an Associate AIA member and further studies of computer aided design and BIM. Mr. Vance is currently a Construction Document Specialist at SP Design Group.

Mr. McGhee, a graduate of Peach County High School, received a Bachelor of Science degree in Electrical Engineering Technology from Georgia Southern University in 2002. He continued his education by earning his M.B.A. degree from University of Phoenix.

Mr. McGhee joined SP Design Group in 2003. Working under the tutelage of Mr. R. Wilson, Mr. McGhee has been responsible for the design development of electrical and plumbing CAD drawings for the projects of SP Design Group. His dedication to the job helps SP Design Group achieve proper coordination between disciplines and make project deadlines. Mr. McGhee is currently taking the steps necessary to sit for the FE exam.

Mr. McGhee is an active member of his Church’s youth development program, which works throughout the local community to help youth strive for excellence. 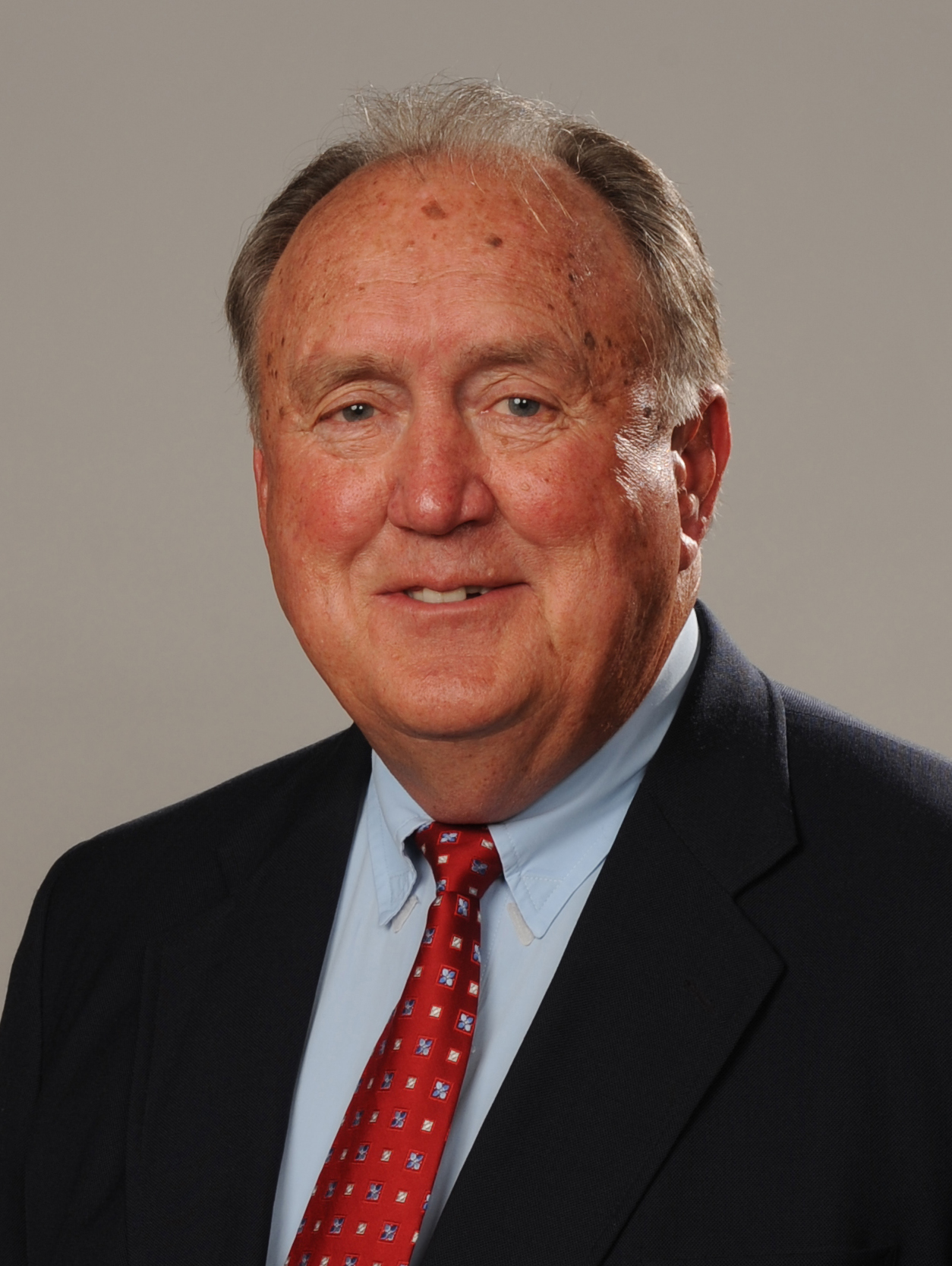 After graduating from the University of Georgia, Sampson taught and coached for several years before becoming a school administrator. He served as Assistant Principal and Principal of Crisp County High School, Principal of Lee County High School and Superintendent of Cook County Schools compiling 34 years as a professional educator.

During his tenure as Cook County Superintendent Mr. Sampson was involved with the planning and construction of a new middle school, planning and bidding of a new elementary school and developing a plan for a new high school.

Mr. Sampson is a member (Retired) of the Georgia School Superintendents Association and formerly served on the GSSA Board of Directors. He is a member of the First United Methodist Church in Cordele, Georgia where he resides with his wife Ginger.